The GOOD and the BAD and the UGLY.

GOOD =WATER, the cleanest, safest gas on the planet period!

UGLY = They the (the petro-dollar) try and murder the WATER car inventor. The two cancer isotope vera-chips ( now called positive ID) that was planted in Bob's shoulder while drugged, at the compelled shop, in Sanford, FL. 3/09. Bob lives today! and the chips were taken out, the 30 tumors it produced all vanished and disappeared in a month's time. Jesus healed him, from a prayer over the phone and many people praying for him on a prayer chain Online. The man who chipped Bob, Robert Potchen, NSA agent, is now in prison for 22 years, for beating his wife in a public parking lot. Justice done from above. Numbers on the receiver chips lead to Our beloved USA tax paid agency that can NOT be trusted: NSA DO they serve the American people or do they serve the oil corps or the air quality police?

C.A.R.B ( California Air Resource Board) Oil Corp. owned. Proven by this movie : "Who Killed the Electric Car" GM and CARB destroyed ( ground up into pieces on a conveyor belt pile) the EV1 cars that were made by GM. Now they were forced to make the Volt and Jack Lutz, GM CEO was made a fool in the sequel : "Revenge of the Electric Car" God Bless Elon Musk and the Tesla Electric Cars! GM is owned by the Oil Corps. run by ?

If C.A.R.B. really cared about California Air? they would campaign and get rid of Chem Trails
that spray COAL ASH all over California, alum. oxides, barium and radioactive strontium in X'ed patterns on about 180 days per year.

It is shame to allow ignorance of a more cleaner cheaper safer technology, be ignored? A way of SAVING LIFE, CLEANER AIR to breath, 15 less carcinogenic chemicals be sprayed out on our hyways in un-detectable nano sized particulate exhaust fumes. The answer is WATER, yes ORTHO hydrogen all from WATER, it completes the burn in the cylinders and no more hot burning fuel down the exhaust manifold! SAVING trucks on burning ALL THE FUEL that they purchased!

Carbon nanotubes now found in children's lungs. Oct. 2015 Another find is cremators who burn up deceased humans for burial, now find white plastic balls in the bodies ashes, healthy bodies the ball is the size of a marble, fatter bodies are the size of a golfball. The cremators ( who I will not mention) family has been cremating bodies for generations, and Grand Father says he never used to see this balls until a few years back. 1996 when the CIA (Evergreen Air) started chem trailing our skies. WHen they send the plastic ball to a lab, it disappears in the lab or gets lost? PLastic melts at 2000ºf, but not ALUMINUM OXIDES, the material that makes up the white space shuttle shingles in the past. the white cubicles in foundation work, from the car exhaust and chem trails. Aluminum is now in all fuels, jets, cars, diesel? It helps the ICE engines burn better. Aluminum oxides gives you alzheimer's and dementia and also calcifies your pineal gland and render you spiritually stupid, your 3rd eye is dumbed down, so you do not pray to GOD or mediate. They do not want you meeting that guy named Jesus, the man they can not bind up and destroy.

SAVING FUEL $$ and NO MORE TRUCK FIRES! Guess the remedy? WATER! H2O boosters for now, full water in the future!

Now the for bad news for California and the rest of 50 states.

C.A.R.B. Agenda21 un-elected board, has saddled trucking companies with costly regulations that not only will raise the cost of transportation, but will force many independent trucking companies out of business or out of state, and substantially raise the cost of living for every California resident. ( The .01% global banker elite will NOT like being exposed, it will drive them batty.)

CARB views its operation as ABOVE THE LAW, and refuses to coordinate with local governments. Coordination is require in both the US and California State Constitution.

View the You tube videos below, given to us by Robert Exter. The youtube videos that the view count NEVER GOES UP, been the same for 2 years now. 2/18/16 The video's show proof of a Federal Agency that is main purpose is to allow nano particulates to float in the air for days polluting the CA citizens with 25 carcinogenic chemicals that are below 1 micron and can not be detected with modern SMOG exhaust sniffer equipment. CARB uses pseudo science with a Dr. Hien Tran, who paid $2,000 to get a fake doctorate degree online, who was caught in court for his pseudo science and convicted. He was NOT fired but given a raise! instead for his ability to LIE through his teeth.

Thanks to EPA Attorney Fred Kelly Grant and Peter Peters for their hard work!

LOOK how CARB is Destroying California - Trucker OUT OF BUSINESS.

LOOK how CARB is Destroying California - CARB is unfair and costly

CARB did not Coordinate Part 1

CARB did not Coordinate Part 2

CARB did not Coordinate Part 3

Is the increase in diesel truck fires due to a filter required by C.A.R.B.?

Peter Carrillo - Carb is destroying his business and other businesses like his.

Will children die before we find the cause of this flaming inferno? PLEASE FORWARD

Will it take the tragic deaths of children before we correct the cause for these fires?

C.A.R.B. is at the top of the pyramid, the single eye on every greenback dollar, in the same evil category as MonSatan'o', Planned Parenthood, Mandatory vaccines that kill you and leave young women non-futile, Geo Engineering/Chem Trails. All part of Agenda 21, the NWO, designed to take down GOD's human pollution by poisoning everyone and sending them all to hospital, is the goal here. Against all humanity, serving a dark twisted side of life, that will soon perish. The recent VW emission problem was designed to regulate DEF filters on all diesel cars and trucks in the world. We have the answer with ORTHO HHO made from WATER. It would solve their problem, but they refuse to listen. Push will come to shove and WATER is very powerful. Do not mess with GOD's natural resources! HHO the safest, cleanest, most renewable natural resource! Hands down!

Aluminum is now in all fuels, first in jet fuel and now in gasoline and diesel, Aluminum helps give more HP, but produces Aluminum oxides when burned and we are all breathing it in. Also they is a chemical in the fuel that makes the SMOG clear and less brown colored SMOG. Back in the un leaded fuel days we had 13 carcinogenic chemicals coming out the tailpipe and the carbon content feel to the ground behind the car. Today we have 25 carcinogenic chemicals coming out the tailpipe and all in a tiny nano size particulate that the DEF filters convert to below 1 micron and goes undetected by the modern SMOG sniffing equipment. New CA CARB approved SMOG equipment, do not use the sniffers no more! They only check the ECM to make sure it is working. We are purposely being poisoned by CARB, not at all cleaning up the California Air. GO to the carb website they are busy giving them selves awards, the same goes for Monsatan'o' they give themselves awards, while thy run the most hated corp. in the world MonSatan'o'. CARB is right on board with MonSatan'o'. I can back up all that is written here.

We have the answer that the THIEVES REFUSE to look into. WATER and OIL do not mix.

Andrew speaking about the different atomic levels of HHO gas from WATER at the 2015 Tesla Tech Conference. 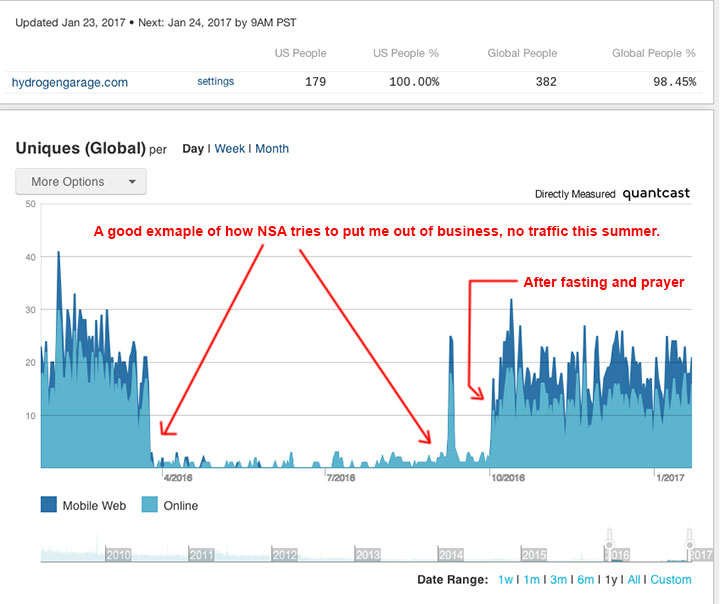 The above diagram shows how they want Hydrogen Garage out of business and off the roads.
WHY? WATER is cleaner than oil. Our emissions results.

"Blessed are they that are persecuted for rightousness' sake, for their's is the kingdom of heaven." Matt. 5:10